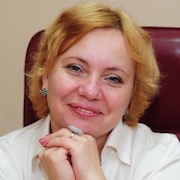 The first years of my labour activity started in 1987 in the area of the financial activity of the state bank.

In 2001, I created an effective financial department in a big private company in Ukraine and I am its Financial Director. I took an active part in the development of scientific and methodical materials on the implementation of the inclusive forms of education of disabled people in the teaching process.

I established close co-operation with the Ministry of Social Policy and Social Protection Funds for the Disabled concerning the education of the students with disabilities, creating working places for them.

It is during this period the practical implementations of IFRS in Ukraine coincided with. I constantly raised the professional level, took an active part in the national and international scientific and practical conferences. The most important of them was the educational programmes of the Institute of the Certified Financial Managers (ICFM). Thanks to the high level of professionalism of the lecturers of the ICFM and the programmes that they elaborated, I have been annually increasing my professional qualifications since 2002 in the Institute of Certified Financial Managers of Great Britain in Ukraine (ICFM & ICB). In November 2019, I took part in the annual work of the ICB Bookkeepers Summit, of the International Summit of the Institute of the Certified Financial Managers ICFM and ICB Global.

Thanks to close co-operation with the Institute of Certified Financial Managers of Great Britain in Ukraine (ICFM & ICB) and the knowledge I gained, a lot of new opportunities opened in front of me. Now I have set up my own company in the educational area.

I highly appreciate our co-operation with ICFM & ICB.