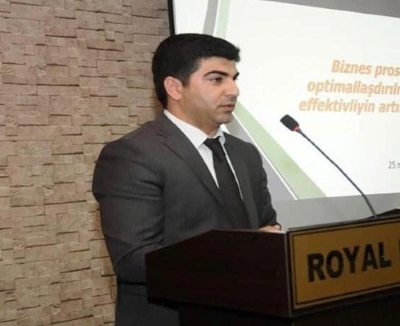 I am Rashad Asgarov, I am 41 years old now. The beginning of my success story dates to early 2007.

During this period, I started working as an ordinary accountant in the field of finance and accounting, and I was looking for ways to improve my knowledge in this field following international standards.

One day I heard that our company (SOCAR) decided on the application of IFRS and will involve employees in international courses. Thus, starting from this period, my dreams began to come true, and in short, I set out on the path to co-operation with APFM. Our co-operation with APFM has expanded over several training phases including ICFM programmes and I have received international certifications.

Our cooperation with APFM offered me another success, and since 2013, I have been promoted to APFM as a Methodist, Committee Chairman and Board Member. I was awarded the LUCA award 'Best Teacher of the Year by the ICFM based on the APFM presentation for the best results in the groups I trained.

The certificates I received and my work in the association paved the way for my career success, and over the years I was promoted from an ordinary accountant to Head of Division and Deputy Head of the department of SOCAR. I would like to thank the staff of APFM and its chairman Ms Nuriyya Novruzova, ICFM management and Mr Garry Carter for all these successes and sincere co-operation.